Imagine glass or lacquer surface under the microscope. It is not smooth; rather it resembles a rocky landscape. In the valleys of this landscape dust and dirt settle down in the long run (see image 1). Glass that has not been treated for a long time is hard to see through and untreated lacquer gives an impression that it has faded. Many people are not aware of this until a dirty piece of glass is put next to a cleaned one. Then the difference is obvious.

Image 1 – A surface with sedimentary impurities

PIKATEC cosmetics perfectly clean this rocky landscape (the surface of lacquer or glass) and remove settled dust and dirt. This is thanks to the microscopic nanoparticles and other patented chemical elements contained in the cleaning solution. The nanoparticles penetrate all folds of the surface and perfectly remove dust and dirt from it (see image 2). Only after having been cleaned is the surface is ready for the application of protective PIKATEC polish (see image 3). The better cleaned, and especially degreased, the surface is, the better the adhesiveness and resistance of the follow-up polish. When the surface is not degreased perfectly the polish’s surface may exude grease for some time (this is manifested in a reduced repelling force in relation to water or in visible stains on the surface), which needs to be polished out and thus spread over the surface with a dry piece of cloth. This may be repeated several times, and then the polish should function correctly.

Anotherimportant factor before the polish is applied is that it is necessary to eliminate all impurities and stains from the car body or glass by polishing them out with a dry cloth (for example, dry stains left by water droplets)! The application and follow-up polishing of the polish would “preserve” these stains in the polish and subsequently it would be very difficult to remove them.

CAUTION – the most frequent reason for failures in application is when the surface that has not been properly degreased! The use of greasy preparations, such as clay or similar, or a preliminary washing of the car in an automatic car wash (where waste water with spray wax is usually recycled) may reduce the effect and shorten the service life of PIKATEC polish. Also air compressors, used to dry the car body, sometimes exude oil, which is used to lubricate the compressor’s piston, along with the air – this is often the case unless the compressor is equipped with a filter.

2nd phase – application of the polish (emulsion) on the surface:

Unique nanoparticles are permanently dispersed in the application emulsion, which is applied in a very thin layer on the treated surface (see image 4). The applied amount should form a visible thin film. Applying more emulsion is pointless since it will be removed during polishing with cloth anyway. This would only make the polishing job more difficult and some of the lacquer would be simply wasted. 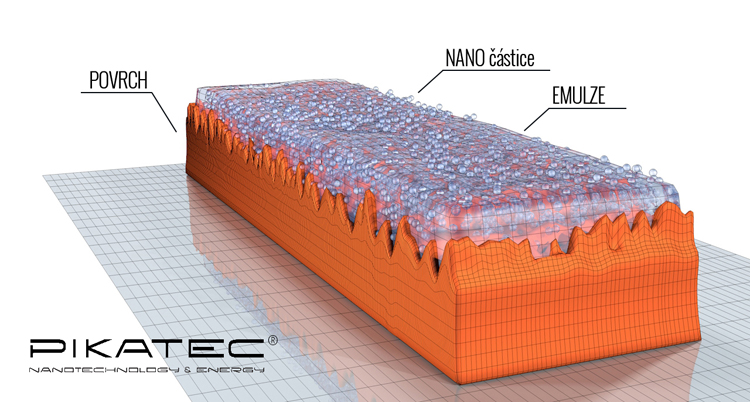 Let the film act on the surface for about 30 minutes(if the polish is applied to glass, start polishing it after 5 minutes). The polish will penetrate the lacquer’s structure. After this time passes a layer of PIKATEC polish should be polished out with a piece of application cloth (see image 5). In this way the unique emulsion will penetrate deep into all the uneven parts of the bodywork (i.e. into all the valleys of the rocky landscape). Any layer protruding above the peaks is redundant and will be wiped away. Detailed instructions are enclosed with the Diamond Nano Armour, Diamond Nano Protect Wheel and Diamond Nano Protect Glass products.

3rd phase – one hour after application:

The polish slowly dries from top to bottom and begins to exude emulsifier, which functions as a carrier for nanoparticles (with Diamond Nano Protect Glass polish no emulsifier is exuded). The unique PIKATEC nanoparticles settle into their final resting place on the surface. Each pole of an individual nanoparticle is polarised, i.e. each end has a different polar charge. This causes PIKATEC nanoparticles to line up in one direction, towards the substratum. The second direction (on the surface) also repels negatively charged particles of dust and other undesirable molecules.

Within another 12 hours the emulsion reaches its final hardness. Nanoparticles are lined up on the surface and hold onto it due to van der Waals force and dispersive forces as well as naturally due to the new, revolutionary cosmetic emulsion. They form a protective film that significantly increases the hardness and resistance to adhesion of the bodywork. A final resistance to liquids is also achieved (see image 6). When setting takes place under low temperatures the time taken for the final hardening is slightly longer.

Unlike with the original formula of the previous series of PIKATEC cosmetics, a surface treated by PIKATEC DIAMOND polish may be exposed to solar radiation, light rain as well as frost down to a temperature of -5°C even after about 90 minutes. It is important to remember, however, that the polish reaches its final hardness only after 12 hours. Before that, heavy rain or an abrasive environment (e.g. a drive in a dusty environment) could disrupt the structure of the protective layer. In the meantime try to avoid using windscreen wipers which can do damage to the hardening polish - however, always observe the traffic rules! 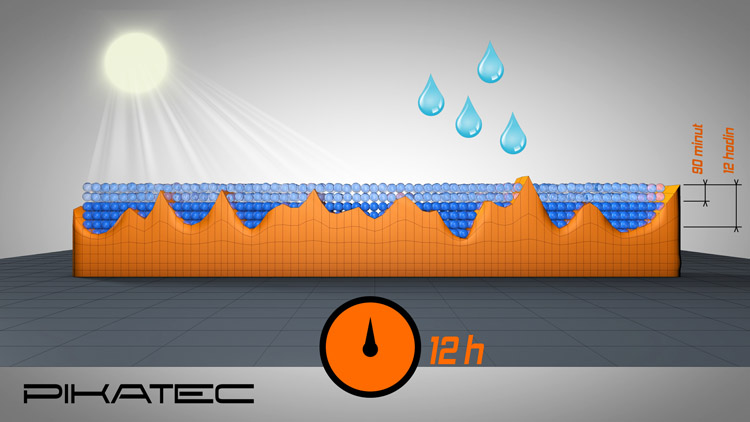 Image 6 – Final setting of the polish

During the setting phase you may, particularly on dark bodywork, observe the creation of light maps or small shadows that give the illusion that particles of dust have fallen onto the treated surface or that the polish has not been spread sufficiently. This is the result of the emulsifier being exuded (the carrier of nanoparticles) (see image 6). The emulsifier has to be, after roughly 48 hours, thoroughly washed away with water (especially in hot summer weather), after that it should be lightly spread out evenly with a piece of cloth. If the exuded emulsifier remains on the bodywork (you can tell by the bodywork’s capability to repel water being reduced), it is possible that the emulsifier ‘cakes’ onto the polish and you may think that the polish isn’t working, particularly in hot weather. In such cases it depends on how much the emulsifier has caked onto the polish: it may not be possible to remove it all, which would result in worse hydrophobic properties. Therefore, take care to ensure that the emulsifier is thoroughly washed away. The polish only becomes highly resistant to water after this layer is washed away. With each subsequent washing these properties will improve for some time. 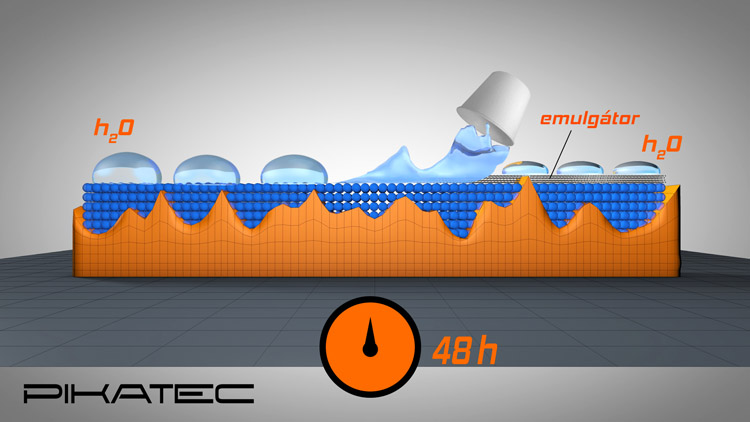 Image 7 - Removal of exuded emulsifier, which needs to be properly washed away with water within 48 hours

The nanoparticles hold together perfectly. They are so small that no significantly larger particle of dust or other aggressive lacquer-damaging molecule can squeeze in between them. At the same time, the nanoparticles are hard enough to withstand mechanical stresses from other flying abrasive particles, which would otherwise damage the surface. 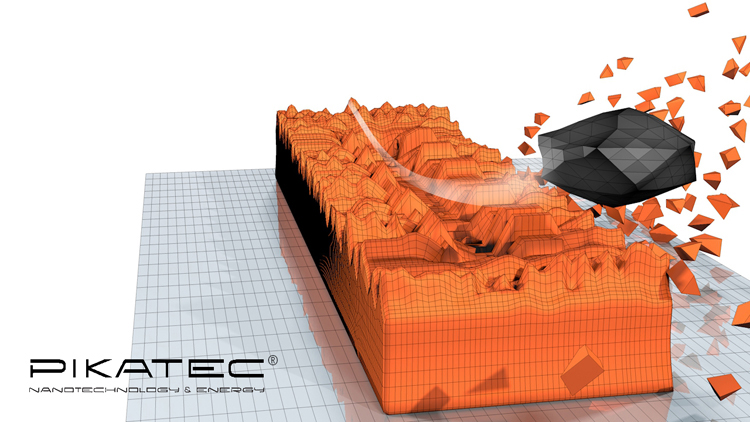 PIKATEC polish will remain on the surface for a period of up to one year (sometimes even longer). It will give a high gloss to the bodywork’s surface and protect it from scratches and from the effects of salts, bitumen, pollen, resin from trees and bird excrement. Protection from UV radiation, which may otherwise cause lacquer to fade, dry out and age prematurely, is also very important (the polish contains very strong UV filters).

Image 10: Lacquer of untreated bodywork magnified 5,000 times. You can see cracks in the lacquer’s structure through which impurities, water and chemicals may damage the structure. Such damage, and the subsequent oxidizing, causes corrosion at the damaged spot. There is a scale in the bottom left corner of each picture that shows how big a micrometre (a millionth of a metre) is in this case! 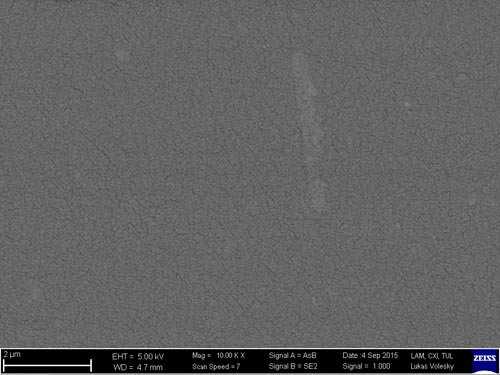 Image 11: Car bodywork treated with new PIKATEC polish. Notice how perfectly the lacquer’s pores are closed in comparison with the original series of cosmetics (in image 10). Magnification is 10,000 times, i.e. 2 times higher than in image 10 and the surface is significantly smoother and finer. Impurities cannot penetrate the lacquer’s structure and thus the lacquer is protected. At the same time the polish is very hard and resistant to abrasion. It contains very strong UV filters that prevent UV radiation, which can cause it to age and degrade prematurely, from penetrating the lacquer. In the bottom left corner of every image there is a scale that shows how big a micrometre (a millionth of a metre) is in this case!

Image 12: Bodywork treated with original Pikatec cosmetics magnified 5,000 times. You can see the difference between new and old polish.